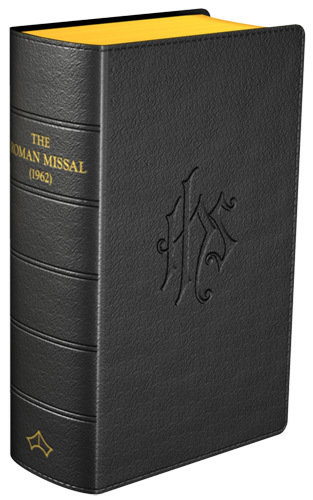 The only complete Roman Missal according to the typical edition of 1962 approved by the Church!

The “1962 Daily Missal” contains the English translations and the Latin originals of the rites and texts for Holy Mass and many other liturgical ceremonies that were attended by the vast majority of Roman Catholics in the centuries before the liturgical reforms of Vatican Council II took effect. The liturgy of the 1962 Daily Missal is better known as the “Tridentine Mass”, “Traditional Latin Rite” or “Traditional Roman Rite” and since 2007 as the “Extraordinary Form of the Roman Rite”.

With its splendid texts and ceremonies that orient both priest and people entirely to the worship of God, this form of the sacred liturgy has fostered a living faith that has produced numerous saints and inspired countless artists, writers and thinkers to create much of what we now know as Western culture. Thanks to Pope Benedict XVI’s Apostolic Letter “Summorum Pontificum” in 2007, this form of the liturgy is now being celebrated more regularly and freely.

Features of the Baronius Press edition of the 1962 Daily Missal: